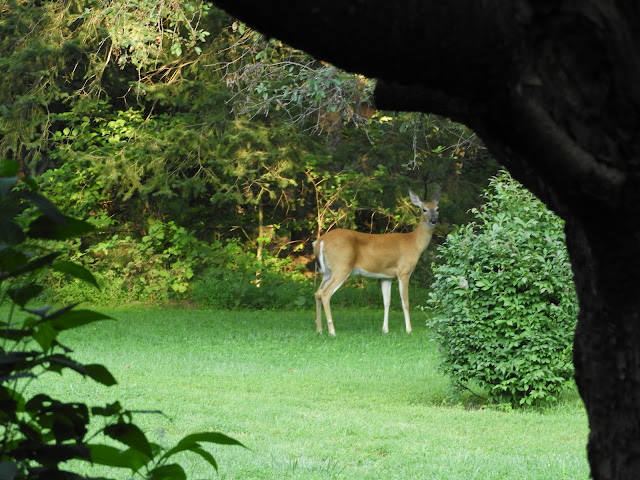 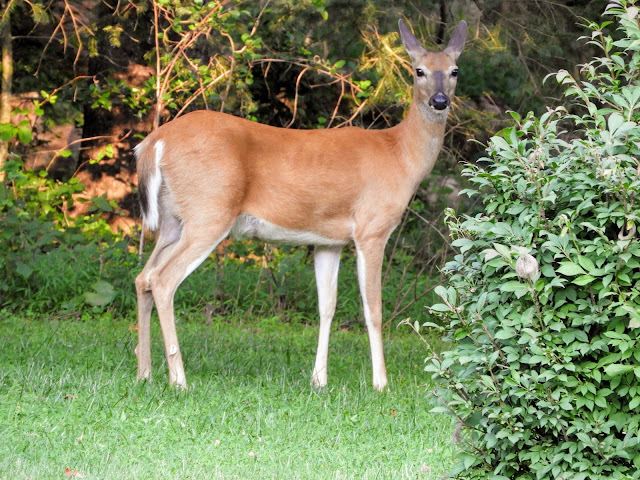 Hello! I hope you are all well and reasonably happy with your life in our new normal. I have been stuck in the house forever it seems due to staying safe and the oppressive heat. Pennsylvania has reached 121,000 positive cases. I'm not sure about the local tally but I do know it is in the thousands. 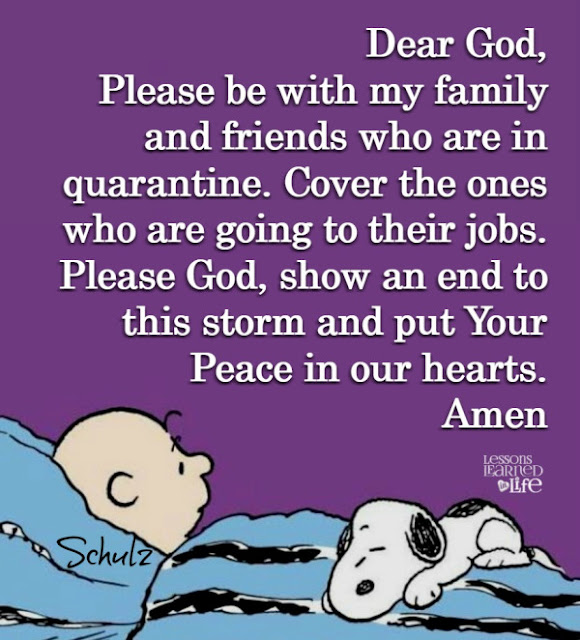 Well, today I am going to get a teeny tiny bit sentimental. I'm really not the sentimental type. But...
Do you get nostalgic for the past? I don't mean the recent past before Corvid. I mean looking waaaay back. I recently came across some pictures on the internet that took me back to when my parents first started their restaurant. It was a brain egg of my father's hatched while he was recovering from an illness, around 1960, I guess. The Island in Maine where I grew up was and is very touristy from Memorial Day to Labor Day. My dad, a fisherman but ever the entrepreneur,  came up with the idea of having a little "hotdog stand" built on my grandparent's property.  They would serve not only the proverbial hamburgers and hotdogs but also lobster rolls, crab rolls, steamed clams. Lobsters, chosen by the customers from outside tanks would be cooked outside on an open fireplace. And he did, against my mother's better judgment, build it. Picnic tables were set up under two big apple trees, with views of the islands, Camden hills, gorgeous sunsets, and boat traffic entertained their patrons. A long terrace was later constructed with granite walls to keep the ocean out and many loads of sand formed a walkway and a place to line up more picnic tables.  It was self serve via the take-out window.  A pretty flower garden was added. At the end of the terrace, a long pier was built with a ramp and float.  This allowed boats of all make and design access to their restaurant. Yes, the hotdog stand had morphed into a restaurant by the addition of a large dining room resting on huge cement pilings over the saltwater that came and went with the tide.  And so, Eaton's Lobster Pool came into being. It was a popular spot. Great food and lovely location for a seafood restaurant, and my dad's larger than life personality.  He was the host, my grandmother the cook, my mother ruling the whole shebang, waitresses and kitchen help hired and me, the slave. At least that's how I thought of it. I was 10 or 11 years old when Dad began building and I worked there summers until I married and moved to Canada. It opened on Mother's Day and closed for the season the first or second week in October. It was all-consuming and I resented being robbed of the summer fun that my friends were enjoying. However, it did instill in me the rewards of working hard. I had money to buy clothes, books,  help pay for my education.  I have always been a hard worker and I give the credit to my parents.
You might ask what I saw on the internet to take me back 60 years?! This. 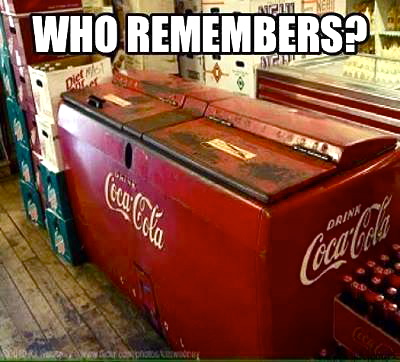 When the enterprise was in the hotdog stand phase we had a smaller version of this cooler. It was filled with 'soda pop' bottles and water. Later a more sophisticated fountain would take its place. No more popping the caps off bottles.
My parents worked hard in that restaurant for about 50 years. They were way past retirement age when they sold it, close to 80 years old. They would have continued on but ill health got in the way. The people who bought it ran it for about 3 years, decided it was too much work and closed the doors forever. They continue to live in my grandparent's house that was included in the sale. Through the years most of the restaurant has been dismantled until it is now a workshop. Being a hop, skip, and a jump from my parent's house it was sad for them to witness the demise of their life's work but such is life, ever-changing.
I have searched through my photo albums to come up with old pictures of the Lobster Pool. I was recently given a postcard. My younger brother is the kid sitting at the table. It was taken just after the dining room was added and given away to customers as a reminder of having a good experience at Eaton's Lobster Pool restaurant on their vacation. The meal pictured was their famous Shore Dinner; lobster, steamed clams, drawn butter, chips, roll,  homemade blueberry pie, or pie of choice, and beverage.
I have had to take pictures of pictures so the quality is off plus they are very old photos.   I have better ones but I would have to dig through digital archives to hunt them down. Unfortunately, I didn't start organizing my photos until I started this blog, 6 years ago? My, the time has flown. 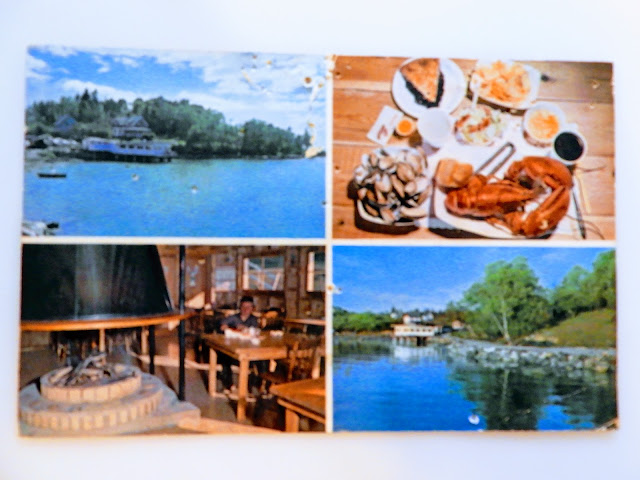 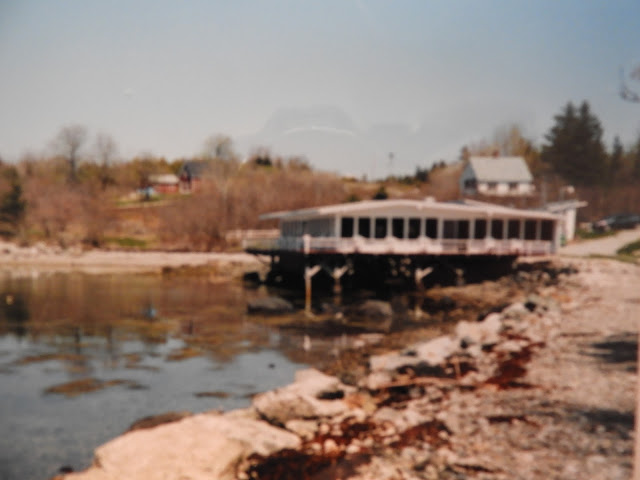 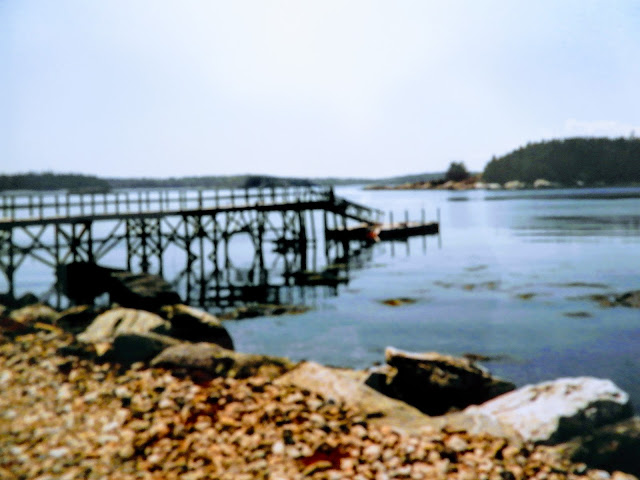 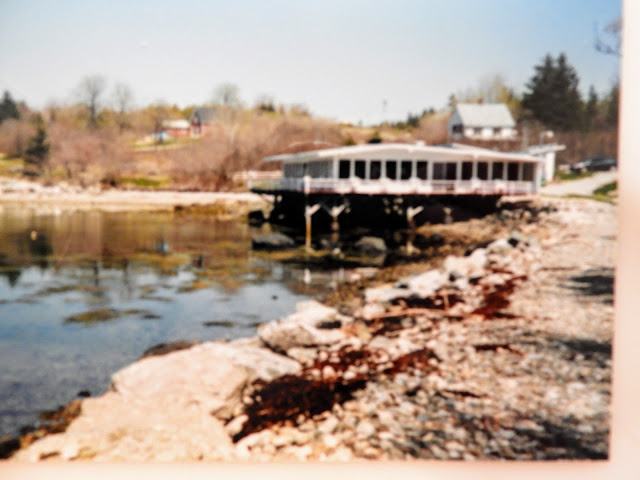 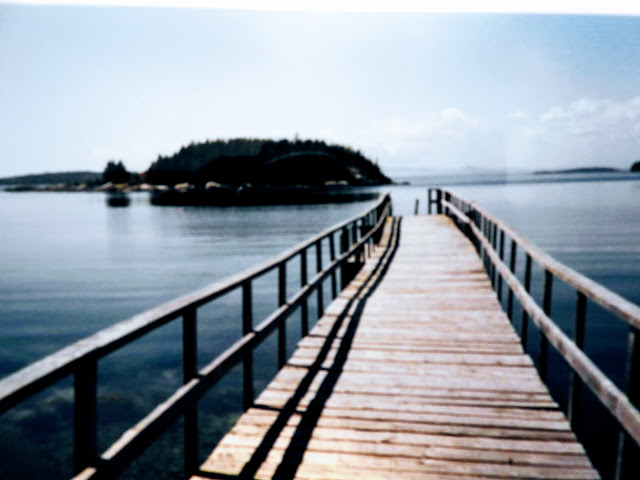 BACK TO THE PRESENT 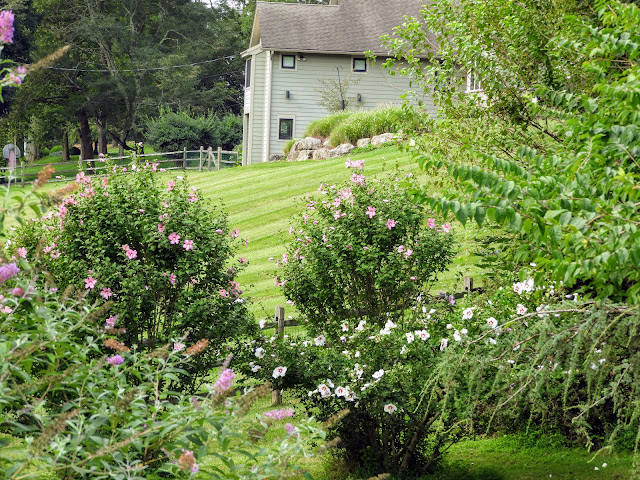 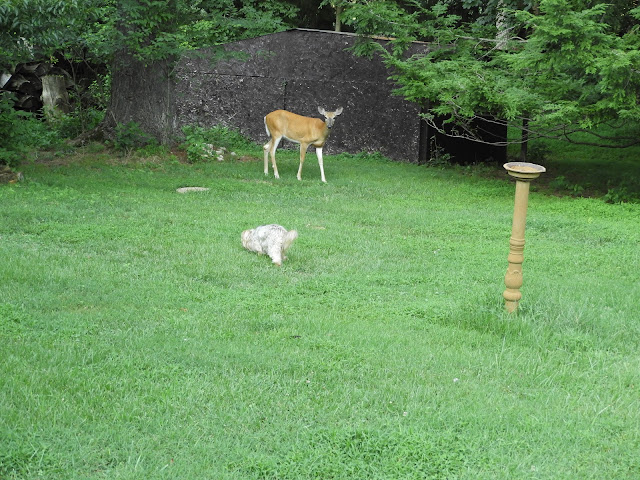 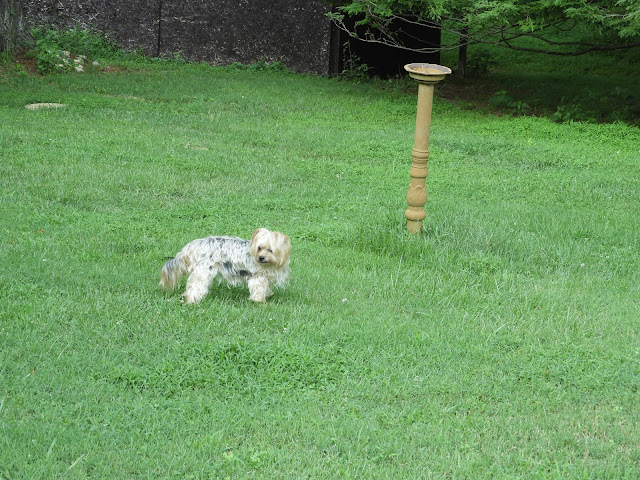 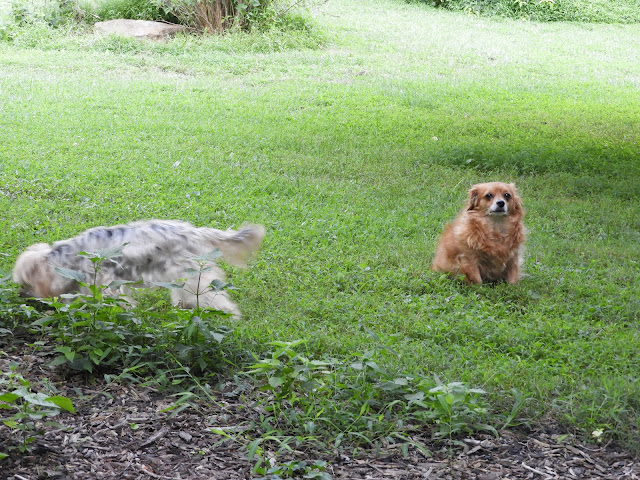 Dolly can't see but she enjoys sniffing around. Lucy sits and observes most of the time. She is getting to be an oldster and has severe arthritis in both her hips which she takes medication for. We adopted Dolly when she was 8, we think, and she has been with us for about 5 years. At the same time she became blind she developed high blood pressure. She has had a hard life before she came here. We love her to pieces! She is so sweet. It's hard to get Lucy moving!  Some things excite her though. Most of it concerning food. She will race around the house with a toy in her mouth making ferocious noises in anticipation of her supper.
There was a doe feeding down by the shed. She looked up to see Dolly sniffing toward her. She just watched but I didn't want to take a chance on what would happen if Dolly ran into her so I start to walk toward Dolly. The doe moved a little distance away and peeked at us from the woodpile. 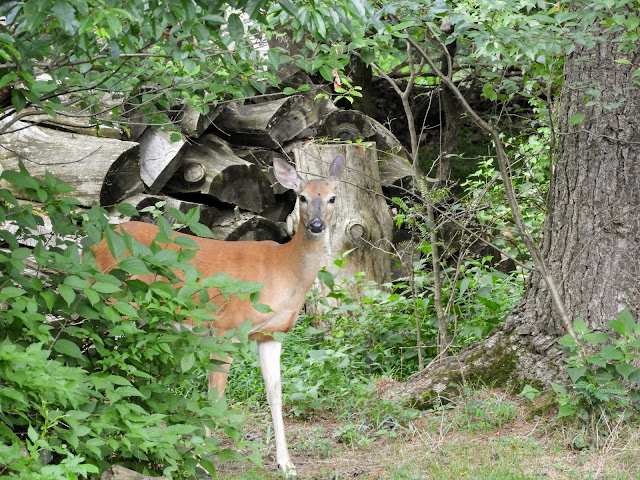 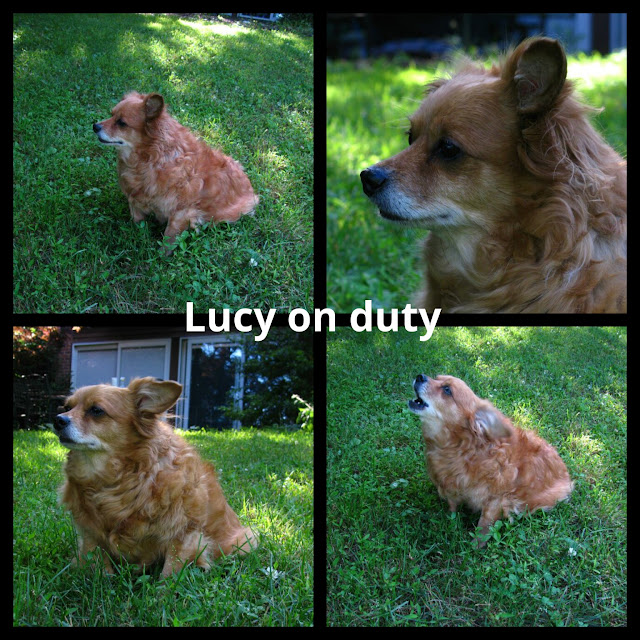 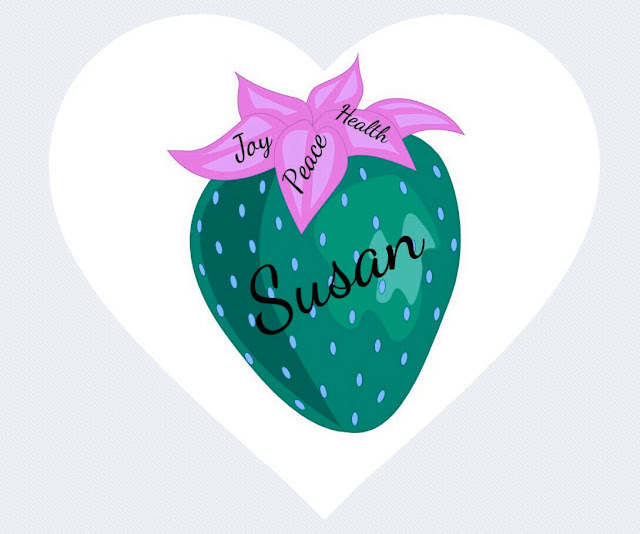 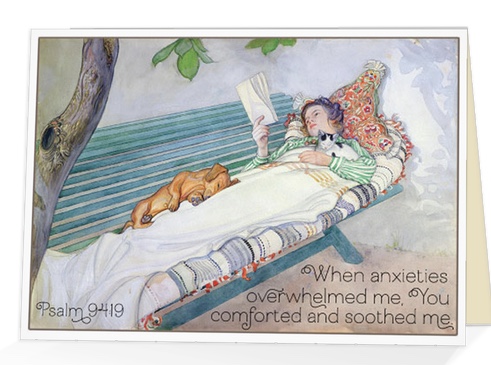