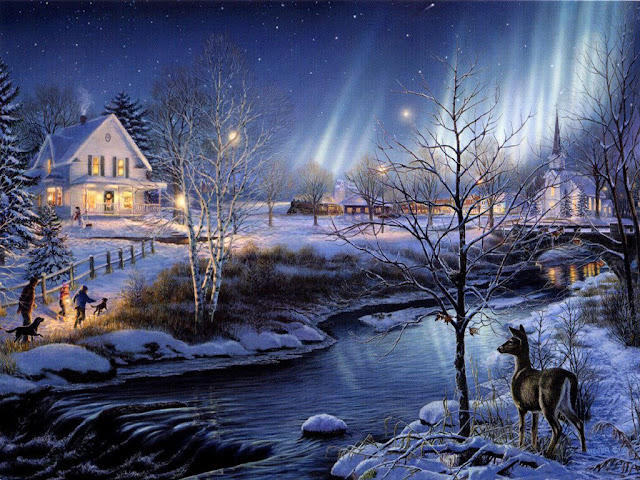 I hope that you are all well and reasonably happy at this time of the year. The biggest joy being the celebration of the birth of our Lord and Savior! 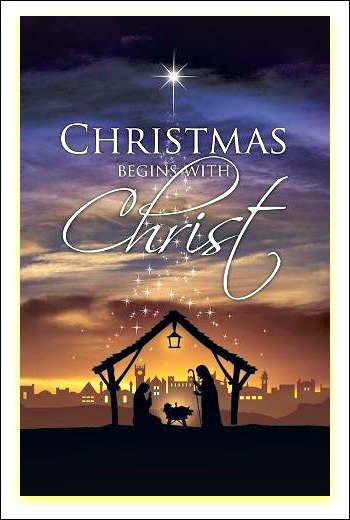 You who visit me might wonder where I disappeared to. Well, a number of reasons.  I have been unwell since coming home from Maine. Really not my no nonsense self. I laughingly refer to it in one of my blogs as trying to find myself again after being mostly absent for 5 years. In Maine we would describe it as trying to find our sea legs again. A popular catch phrase meaning trying to find balance, a feeling of eptitude or getting rid of motion sickness. 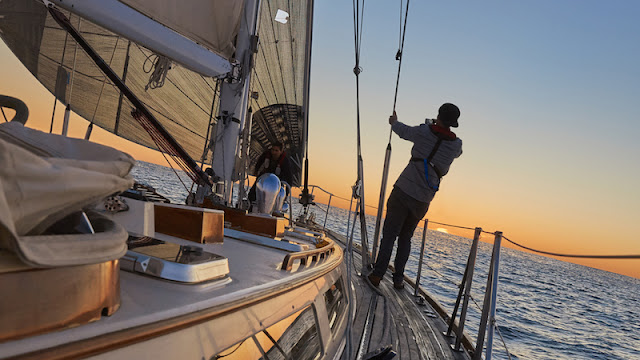 If I’m truthful with you I found my biggest challenge was finding my comfort zone here at home. Roger was so used to having complete control here at home and living by himself that for quite awhile I felt like a visitor trying to blend in and not make waves.

For the past 10 days I have had the cold from hell.  I am slowly improving but my lungs are still congested and there’s a lot of fatigue and coughing involved. It completely ruined the family Thanksgiving day. Now Roger is infected and he has scheduled to be tested for Covid. We both have been vaccinated but not had the booster. He is apprehensive because my daughter’s brother in law has just died from Covid. He was working for the government in the Philippines repairing helicopters. He had refused the vaccine. I wonder how he was allowed to fly and  subcontract for the government without being vaccinated. Anyway, it’s a tragedy. He leaves a 25 yr old son and a wife who suffers from mental illness. She has been waiting for a bed to become available in a mental hospital in Florida for 4 months which she has spent in jail because she refuses to take her medication and became combative towards a policeman. It all started when she took her husband’s  passport so he wouldn’t go to the Philippines. Evidently he was at the airport when he discovered it missing. He missed his flight and had her arrested for theft. He refused to drop the charges. She became combative when the police tried to take her in. And  while in jail she refused to take her medicine. He had her declared incompetent and she has been in jail ever since. The whole saga is incredibly sad. The families have all taken sides but I can’t help but feel sorry for her.  It feels like an injustice has been done to a mentally ill person. Of course, it’s none of my business and I am glad I live in PA. I only have to listen to the ranting of the mother in law on the phone condoning the actions of her son who, sadly, has passed away from Covid. Oh, dear, what a world we live in.

Fortunately for us we have the tree already up since Roger took the ornaments off but decided to leave the tree up all year and uses it for a night light. I must say it does add a lovely cozy feeling of contentment when viewing it on these early evenings. We bought it new last year and it is lovely with lights and pine cones. Rather than dig through decorations in the basement I ordered blue and white ornaments from Amazon. They match the blue in the sofa and in the sea coast  paintings on the walls.

Speaking of sofa…as you know I had it reupholstered because I loved the old sofa and couldn’t bear to part with it. It arrived back home just before Thanksgiving. 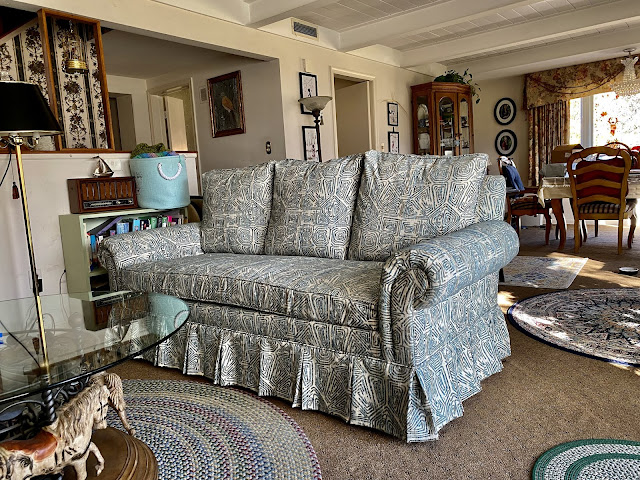 The colors, blue and cream, are a bit brighter than shown. Roger doesn’t like it but I am hoping he will come round. It is a bit on the wild side compared to the blahness of the old fabric covering. It really ties the colors of the decor together. I love it.

I will include a picture of the oldsters… 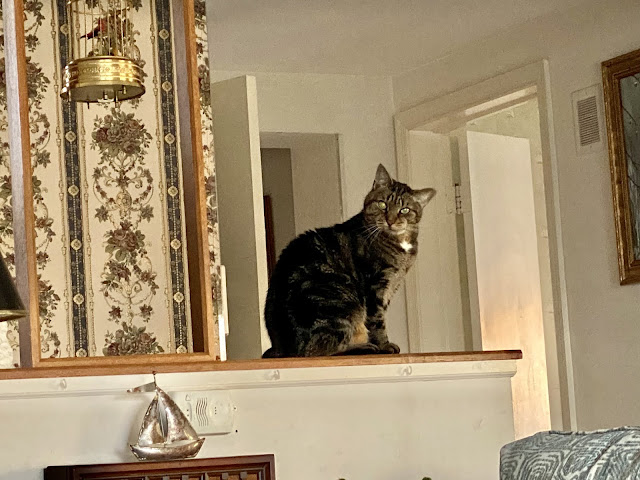 Lucy and Zeppe are never far from where I am. Zeppe, if you remember, has one working eye and ear and mouth is twisted due to an accident when he was a kitten. He is about 12 we think. We adopted him when he was an adult. Lucy is about the same age but we adopted her as a puppy.  My buddies.❤️

Nika spends a lot of time in the boiler room where it’s nice and warm. She likes to be in Roger’s chair with him in the evenings. She has a habit of getting underfoot and I had a bad fall trying to avoid walking on her. I now look down and around to see where she is. At 16 years old there’s not much to her, she’s light as a feather. 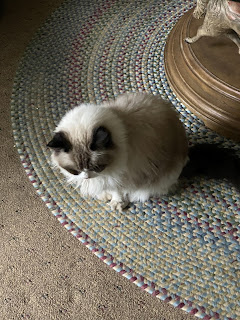 Before I close I must include burning bush pictures from a couple of weeks ago. They are colorful but a little beaten up by the wind and rain. Still lovely to look at. We’ve had cold nights and snow showers but our days have been in the 50’s for the most part. 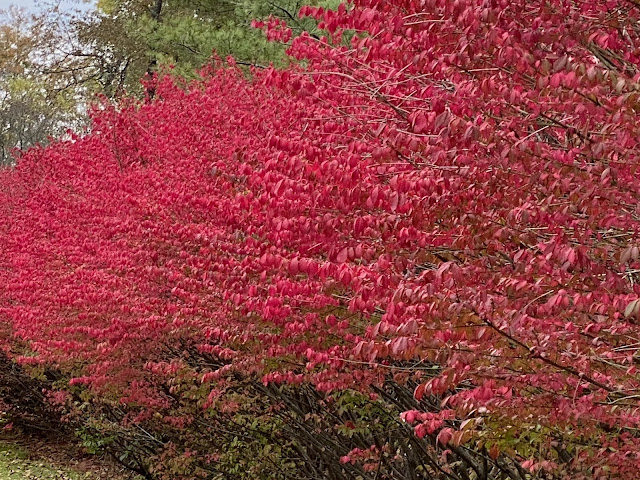 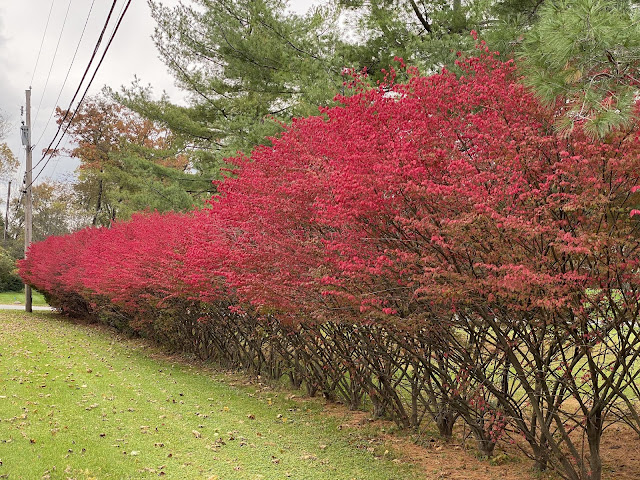 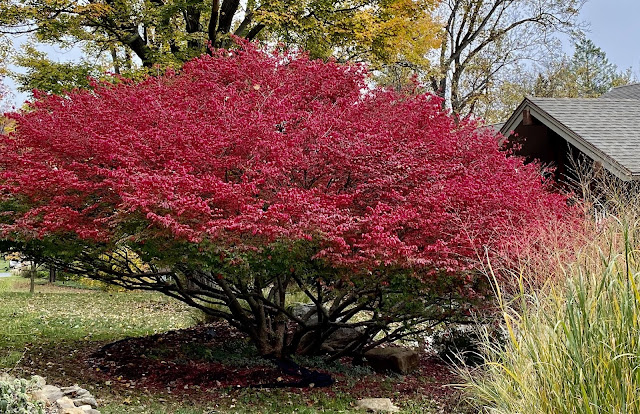 I will try to post more often. December is such a happy month for us. Oldest granddaughter turns 23 tomorrow. 💕She is teaching high school English, fresh out of college. And, youngest grandson turns 14 on the 10th. 💕

Talk to you soon!

Be sure to take good care of yourselves! 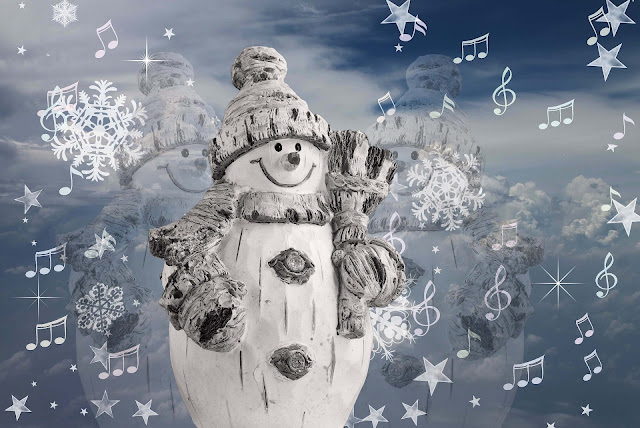 HOW DO YOU WANT TO SPEND YOUR TIME THIS YEAR? YOU CAN ONLY SPEND IT ONCE AND THEN IT'S GONE.

OUR STAG   Our neighbor's stag Hello from sunny PA, 29 degrees F. It’s 8:30 in the morning. This afternoon some time we are expecting an... 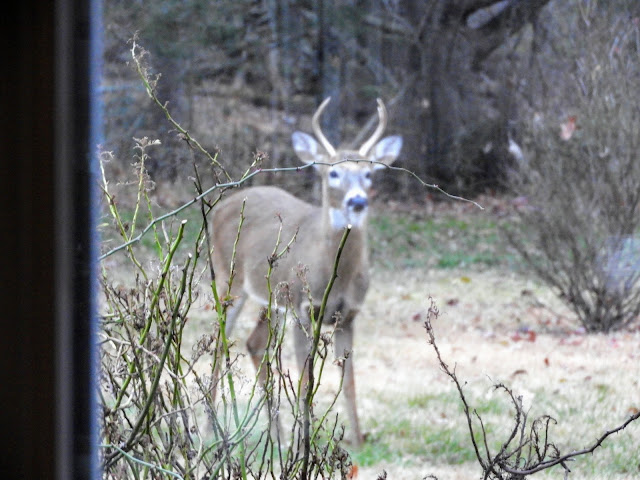