TODAY IS A GOOD DAY!

- August 15, 2019
Today I have much to be thankful for. I woke up with no wheezing, coughing or burning in my chest. I feel sooo much better than I have in the past 2 months. I still have some symptoms but I feel so encouraged for the first time since I was put on medication almost a month ago now. So, it's onward and upward!

It's a beautiful day also. No humidity with temps in the 80's. The dogs and I have been out and about on our  small plot of land. Speaking of dogs, Lucy has her stitches out today from her surgery 14 days ago. Happy day for us all.

I do have photos to share from this past week.  First of all the pups, Lucy and Dolly recovering from their ordeals. Dolly had her teeth cleaned and while under sedation they pulled 7 more of her teeth, poor baby. This is the 3rd time she's had to have teeth pulled. We adopted her about 4 years ago now. She was already 10 years old then. She's not a young thing but she doesn't know it, lol. 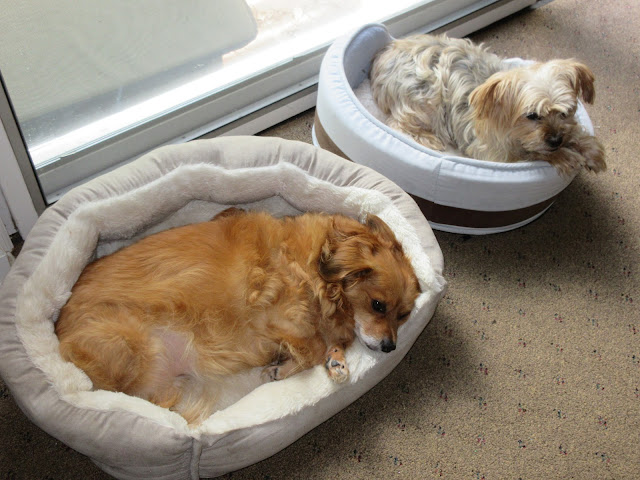 While I was in Maine Roger nearly killed all my plants by forgeting to water them only when he thought about it and that wasn't often. I have managed to nurse most of them back to health and but the only one that is flowering is this begonia. It's so pretty in our bay window in the dining room. It now has 3 more flower buds since I took this picture a few days ago. 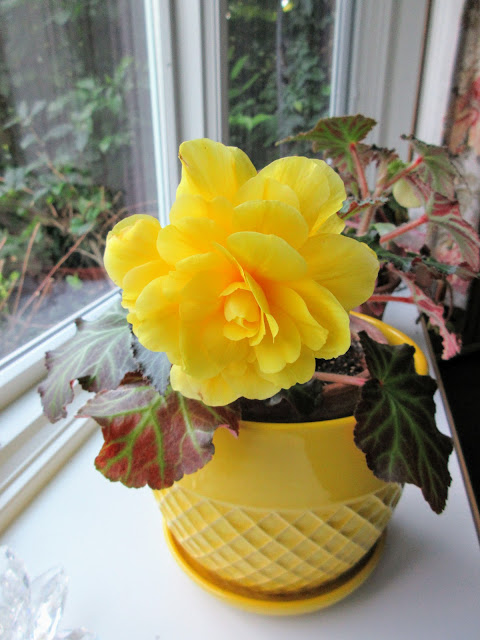 The house was in sad shape also since we lost our cleaning lady and I felt too crappy to do much beside the basic dishes, etc.  I was so proud of myself when I finally got the family room cleaned from top to bottom. As you can see we are a pet friendly family as much as we can be by having the chairs and sofa covered with washable throws. I used to put my crocheted blankets and also quilts on them but the wear and tear was too much for all the work I had put into them. When we have company I just take the "uglys" off  and hide them in the laundry area. 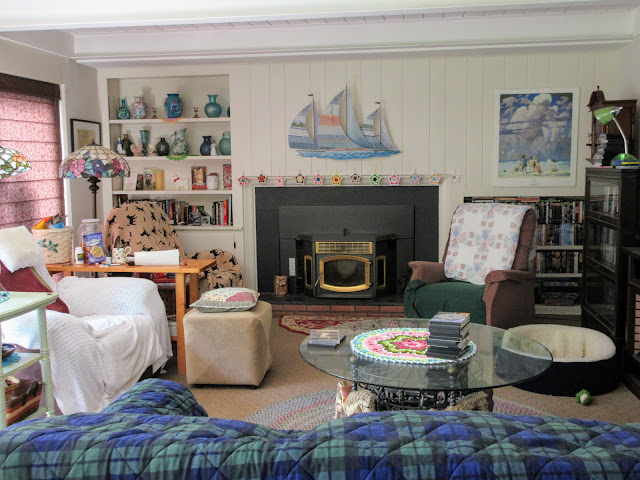 I have been house bound these past 14 days due to the bronchitis and the pets' ailments.  As Lucy and Dolly improved we would take small walks  to get some exercise. Lucy was very limited at first but as her stitches on her belly healed we were able to stretch our walks to the circumference of our 2+ acres. We have lots of trees so we could sneak up occasionally on a few  of our resident wild life that have made themselves at home here in our neck of the woods. Roger has allowed the property to grow wild since he bought the place almost 20 years ago. It has insulated us from our neighbors and given us lots of privacy. 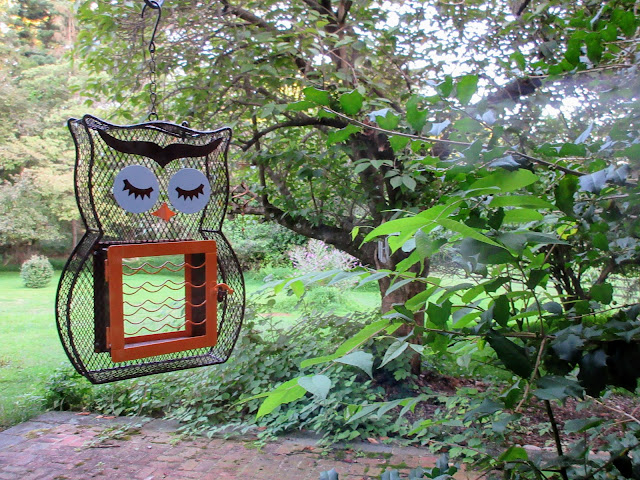 I bought "Mrs Who" (bird feeder) a while ago but thought she was too pretty to put out with suet and seeds during the Winter and have just lately put her outside our french doors that look out on the patio off from the dining room. We don't feed the birds there only in Winter. Isn't she cute?

As I mentioned in my last post we have a lot of butterfly bushes; purple and white. The butterflies love the white ones best. I had a hard time getting a good picture. I took quite a few but they were mostly unusable. I am definitely an amateur photographer but sometimes I hit it lucky. I'm not saying this picture is super but all things considered (I had Dolly on a leash) I was happy with it. 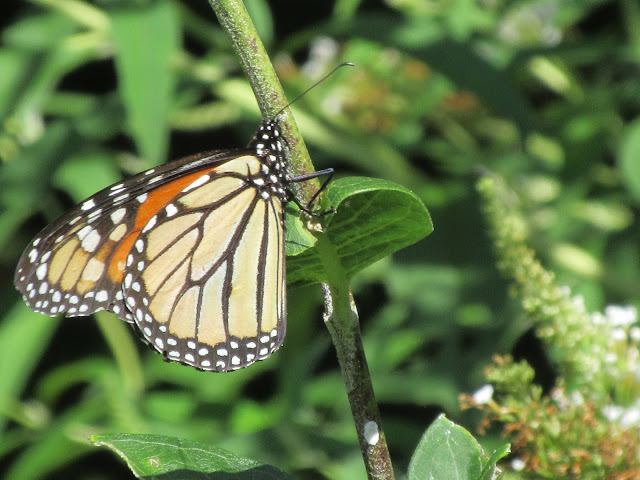 Next up is Willard our groundhog. He was a good distance away and the moment I snapped this he took off to run around the trees, and ferns in the background to go into his hole. In fact, he has several holes spread out so that he can eat in different spots and feel safe. When we had our big dog, Mysti, she was a real threat to him. He's aging now. He has to be about 8 years old. 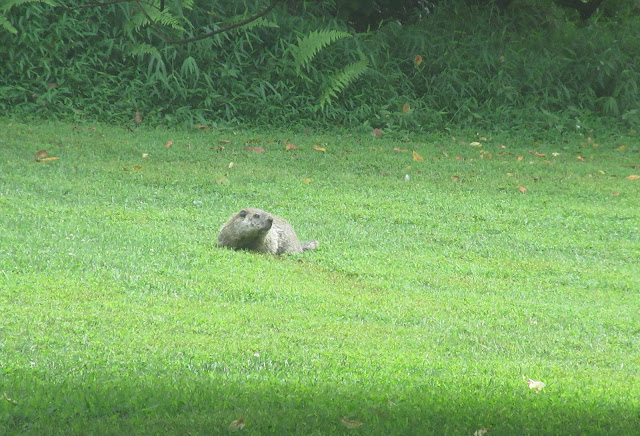 And, lastly, is the deer gang. They start to show up from different parts of the neighborhood in  late afternoon. We are about the only homeowners in our development that don't use pesticides, etc. on our grass. Plus, Roger takes a bucket of deer corn every night just before they show up, usually out around the garages to the back of the property by the shed, to put little piles here and there for them. He does this year round and has done so for all the years I have been here. We are married 14 years now. They have come to depend on it. I would dearly love to downsize to a nice little cottage somewhere and  I have a strong suspicion that his deer dependency is one of the reasons he's not budging. 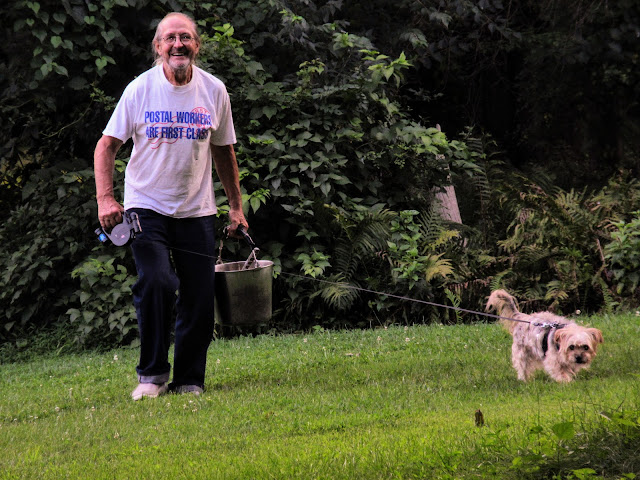 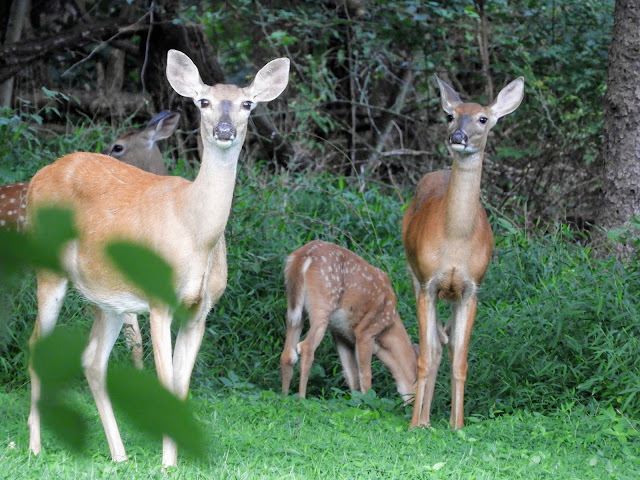 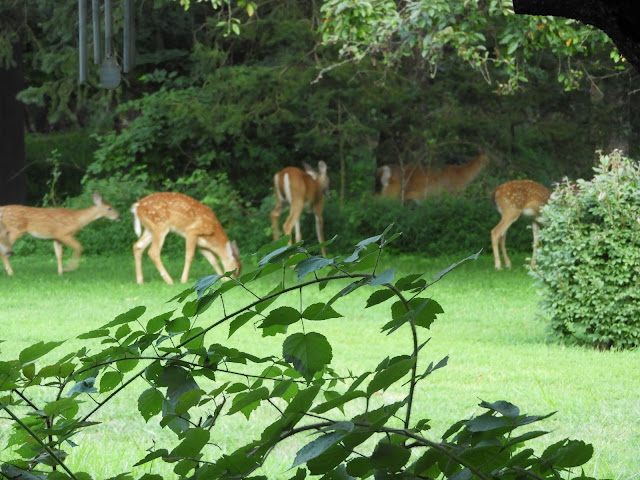 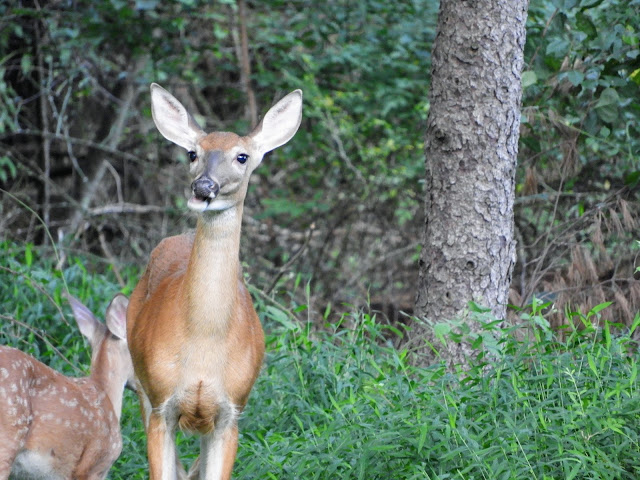 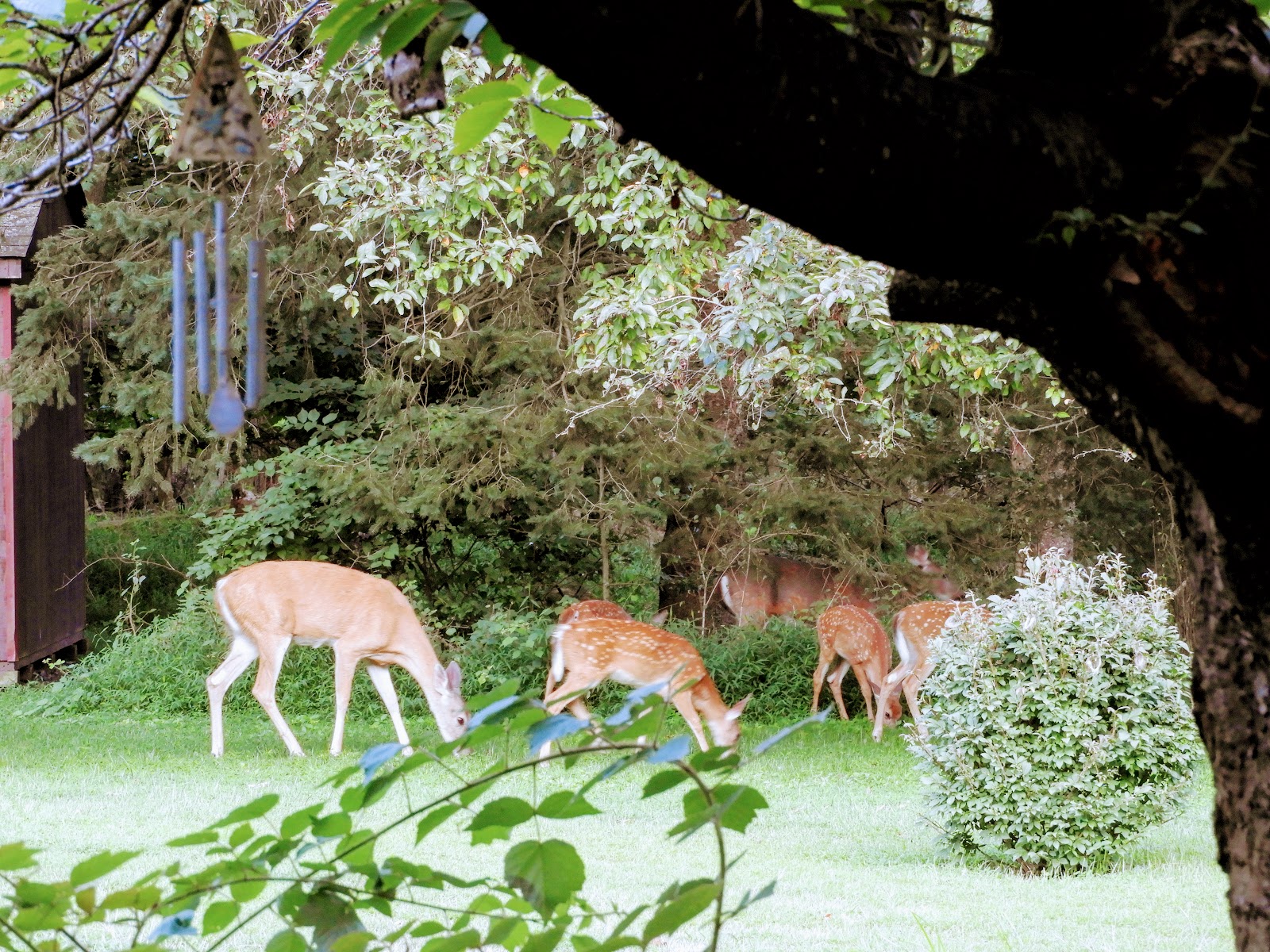 I leave you  with a picture of a pretty sunflower. There's a bunch of wild ones growing around one of our bird feeders. The feeders aren't all that pretty anymore so I decided to just leave them out of the picture. 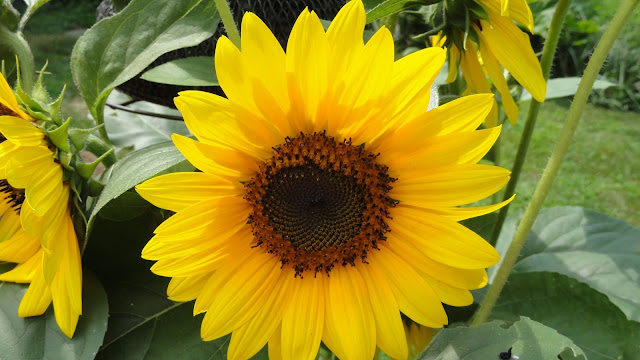 The next time I post I will be back in Maine at Mom's. She has a doctor's appointment coming up and it's time I headed back up north from Pennsylvania to the Island. I am looking forward to cooler temps and fresh salty air from the ocean. The pictures below are from our little cove, Blastows Cove. We have right of way to the footpath that used to be owned by my grandparents who originally owned land in the immediate area. I like to go down after the season ends for the year  because it reminds me of all the comings and goings that went on down there when I was growning up  by the fishermen in the neighborhood, my father being one of them. I can envision it in my mind. There were wharves, bait  houses, lots of lobster boats coming and going. Now the land is all privately owned by Summer residents and the landscape is altogether different. Instead of lobster boats there are sailboats and recreation boats  and fancy piers and floats. Oh, well, that's life; always changing. 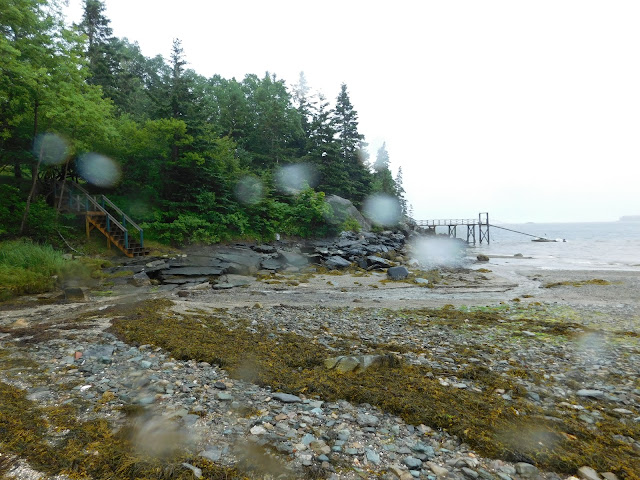 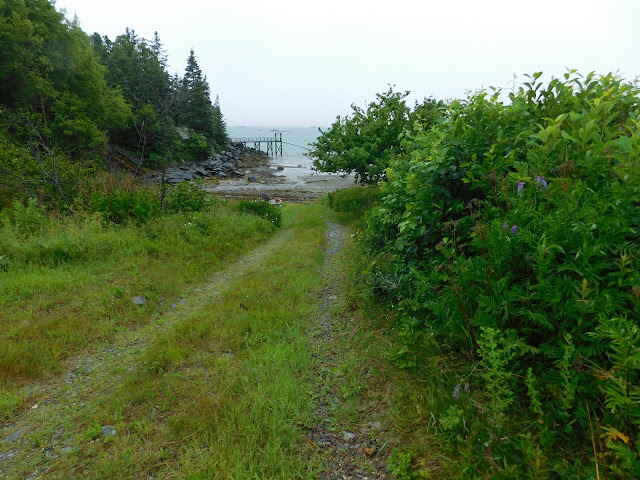 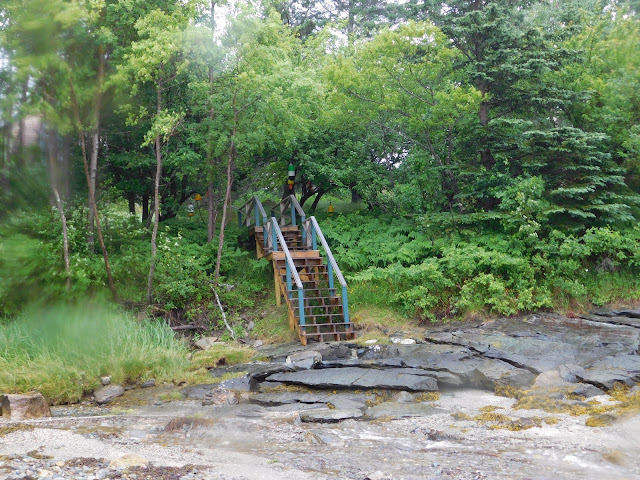 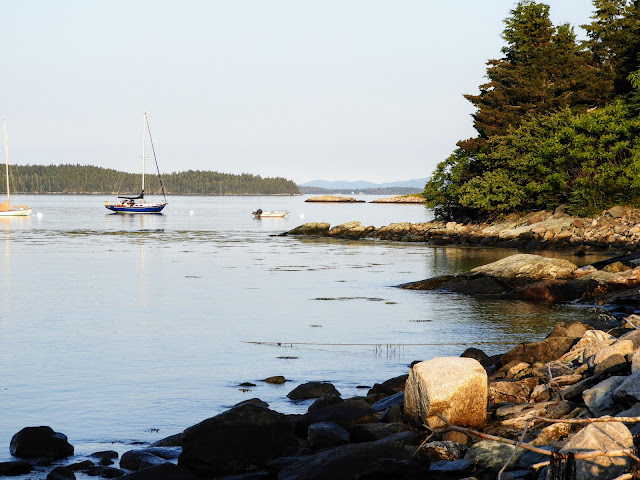 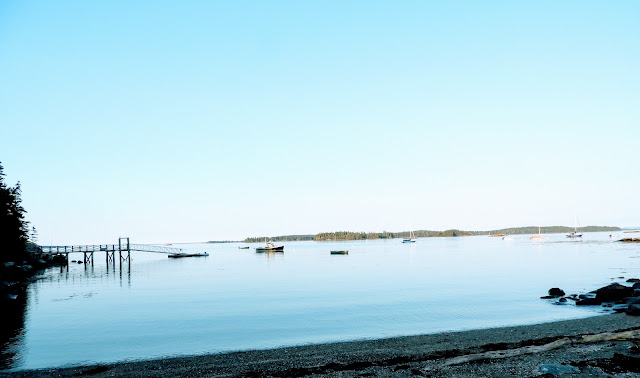