BEING HAPPY CAN BE HARD WORK

❤“Our happiness level is the result of a complex interaction of genes, behaviors and life circumstances. A big part of how we feel is under our control, meaning the way you spend your time and the thoughts you allow really impact your mood and long term happiness.” (Onyama)

Hi there! Have you had a good week? Mom and I are well but we are getting pretty tired of the same old thing day in and day out. I admit to having a lethargy that’s hard to shake. My mind tells me to get myself in gear but my body just isn’t listening. Maybe it’s just FEBRUARY that’s the problem. It’s known for being blah. I think I have a handle on keeping my head above water aka above the depression line. My whole family, on my mother’s side,  is afflicted with DEPRESSION. It is genetic and comes from my grandfather’s side. Back in the day before there were medications and understanding that it is a disease, several relatives succumbed to it by taking their own lives. Of course, depression, to a certain degree, comes knocking on all our doors from time to time. I became so depressed after my first husband of 35 years died of brain cancer. He was only 53 and I was 49 when he became ill. We had just bought a “handyman special” house. It was our first home. The kids were through college and married. We were happy as clams in the mudflats!  Doug was a jack of all trades, so we were confident we could make it into something special for our retirement years. He began the work by replacing all the windows and tearing the old siding off the house to replace it with new. He also was renovating the inside. Bare studs were showing everywhere. The kitchen was remodeled and looked lovely but the rest of the house was unbelievable. We were living in squalor! I wondered at the time why he didn’t finish one job before starting another. I left for a week to go to my youngest brother’s wedding. I came back to find chaos everywhere. My daughter said to me that her dad was acting strange. It took forever for him to do what used to come naturally. He went to the doctor but they couldn’t find anything wrong. One day he acted like he was having a stroke so I quickly got him in the car and rushed him to the ER at the closest hospital. They rushed him into a treatment room and began to “work” on him. He never worked again. His life was taken over by the lymphoma and chemo and radiation and it’s side effects. I was working at the time so I was kept busy trying to cope. I eventually went part time at my job so I could be at home. I prayed a LOT. Meanwhile I had to get the house put back together and make it handicap accessible. His livelihood as a self employed person left us financially ‘in the soup”. It didn’t take long to breeze through our savings when you have to hire. I had excellent health insurance with my job so most of his many hospital stays and treatments, etc. were covered. Five long years later he died on January 12th. Before his death I had coped with life pretty well. My mother and two brothers had been diagnosed with depression and put on medication. I have always been a person of faith. I felt it would sustain me and it did but I was struggling. Finally my doctor convinced me that I had to accept two issues that needed to be addressed: chemical imbalance in my brain and an under active thyroid.  I agreed to go on medication for both and it made a huge impact on the quality of my day to day life. It didn’t do much for filling the void in my heart though. God took care of that, to some degree, when he put Roger in my life. ❤️ He had been in the army, with men under him for over twenty years, and he has a bark. It took the family awhile to get used to him but now he’s recognized as a lovable character. 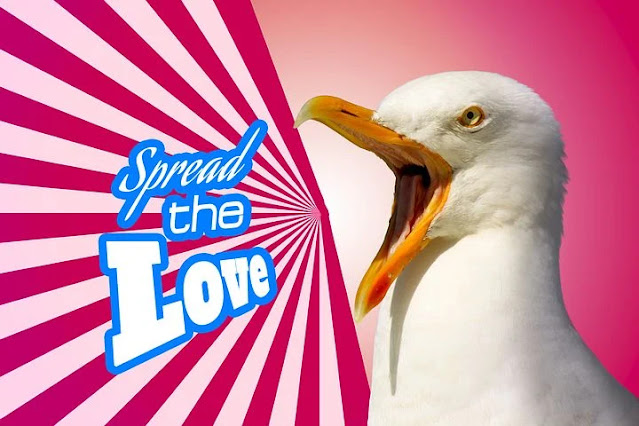 Well, this post is a little different than my usual postings of Island scenes and what’s going on outside my kitchen window. Valentine’s Day is on Sunday but I don’t need a special day on the calendar to remind me that I love and am loved. I am blessed twice over to have had Doug and now to have Roger. We tell each other everyday of the year “I love you.”
❤️